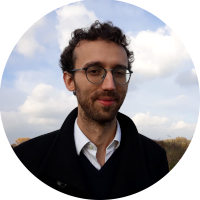 I obtained my Ph.D. in Computer Science at the G-SCOP Laboratory in Grenoble in 2018. Until November 2020, I was postdoctoral researcher at the Department of Mathematics of Radboud University in Nijmegen.

I like solving math problems, programming and learning new things.

I am interested in all aspects of theoretical computer science and discrete mathematics. In the past, I worked for instance on the following topics:

I did my PhD in G-SCOP Laboratory (Université Grenoble Alpes), under the supervision of Louis Esperet and Jean-Sébastien Sereni. The thesis explores the connections of three topics with limits of combinatorial objects: property testing, computational geometry and flag algebras.

Manuscript: Applications of limits of combinatorial structures in geometry and graph theory

Flag algebras is a theory that uses Semi-Definite Programming to produce some kind of computer-assisted proofs.

During my postdoc, I developed an implementation of flag algebras written in Rust to help me in my own research. The documentation can be found there. If you have any trouble using it, don't hesitate to contact me.

An earlier (and slower) version in OCaml can be found there.

Smaller projects can be found on my GitHub page. A non-exhaustive list:

I supervised the master thesis of two students.

I took part in the 49th International Mathematical Olympiad in Madrid (2008) as a member of the French team. I was awarded a bronze medal.